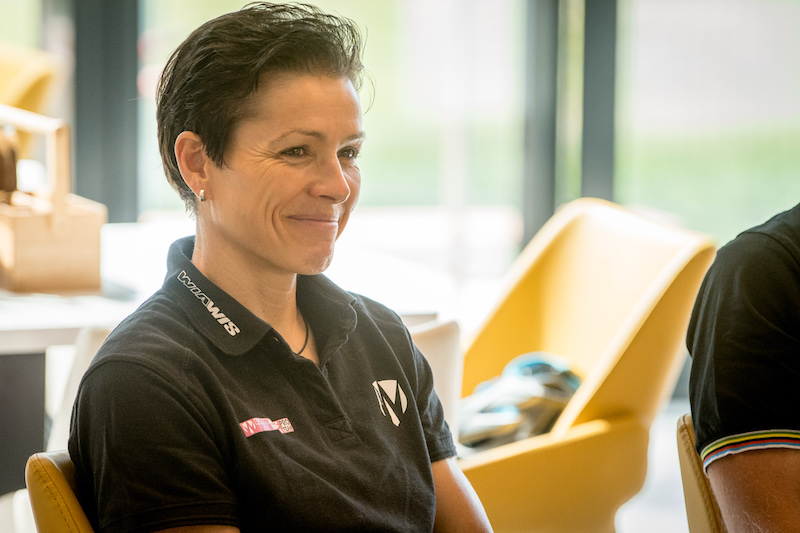 She is not only a local hero at the UCI Mountain Bike Marathon World Championships in Singen, Germany, but also one of the serious contenders for a medal. Sabine Spitz in age of 45 is still one of the top ladies in mountain biking, both cross country and marathon. The three times Olympic medal winner had several appearances at the Hegau Bike-Marathon, including 2015 when she won the European title in a sprint finish with Jolanda Neff (Sui). So Spitz knows about the danger of the course and how to handle it.

It’s a bit more than a one hour car drive from Spitz residence in Murg-Niederhof to Singen, which is located seven kilometre west from the Lake Constance. Home soil or not, in a career lasting more than 20 years, it’s just the third time for Spitz, that she can race a mountain bike world championship in her own country.

Her first experience was in 1995 in Kirchzarten (XCO), when she just started mountain biking one year before. The second one was in St. Wendel 2010 (MX). Now it’s Singen and therefore of course it’s special.

“It’s one of two highlights of the season and it’s great to have one more world championships in my country during my career. Anyway I do not want to get too much impressed of this feeling, but starting with calmness and keeping cool”, says Spitz and explains why: “On this course you should not be rushed.”

The 80 kilometre (for the women) of the Hegau Bike Marathon include not a lot of single trails, but short and steep climbs and a lot of open sections, where the wind can find its influence on the race. So the tactic could play an important role.

Spitz, this year riding for Wiawis, is aware of that. “In 2015 we were already in front with three, but on the flat they caught us again. This can happen on this course.”

Concerning the tactic, Spitz adds: “I think, there will be some who try it early. Gunn-Rita (Dahle-Flesjaa) is an example, who likes to have an early decision. Also Annika (Langvad) is a rider, who is able to put the hammer down in flat sections. But it will also depend on the conditions. When the wind blows, then you have to think how to manage the whole thing. Such kind of women races are really hard to predict. “

As preparation for the marathon worlds, Spitz takes two cross country races in Switzerland (Gränichen and Lostorf). Because the hilly landscape in the volcano area of the Hegau offers only short climbs. “You have to be explosive”, she knows.

The cross country races this spring went well for Spitz. A victory in the HC race at the BiketheRock in Heubach and a second place in the opening world cup round in Nove Mesto na Morave (Cze) are evidence enough, that the Olympic gold medallist of 2008 is still on a maximum competitive level.

So there should be a real chance for her to grab worlds medal number eight in Singen. Compared to the men’s race the women are not that much in the situation to play the team card.

Anyway, Spitz points out, that there could be agreements between some riders. For example between Annika Langvad and Ariana Kleinhans, both riding on Specialized. They have won the Cape Epic together for three times.

“I expect, that there will be a good speed at the beginning to select the big group. Then, perhaps on the longest climb (1,5 km) in Weiterdingen, there could be an attack to split the leading group. But nothing is sure, you have to be in high alert modus for the whole time.”

It would be no surprise since her competitors were also in high alert, when they recognize Sabine Spitz on the front.

Spitz announced the end of her cross country career for the end of the Olympic year 2016, but when she was injured one week before the Olympics and handicapped not able to compete on a high level, she decided to continue also with the Olympic format at least for a minimum of one more year.