Crackling Tension Lays Over the Hegau

Preview on the marathon worlds in Singen 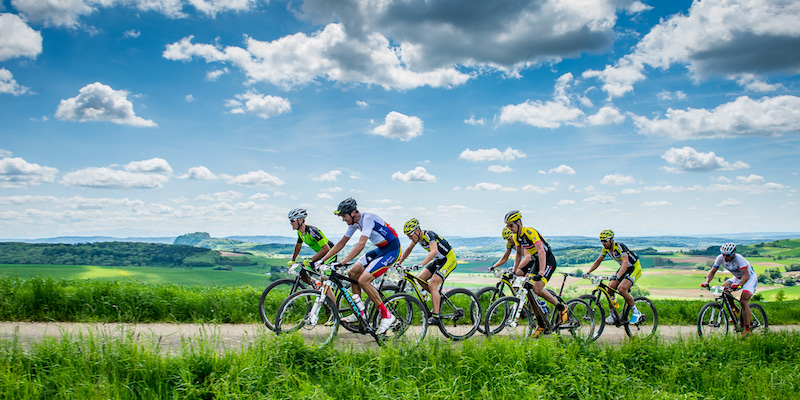 Perhaps never before, the fight for the rainbow jerseys at the UCI Mountain Bike Marathon World Championships were so difficult to predict. Between the 188 registered male riders are ten or more real candidates to grab the title at the Hegau Bike-Marathon in Singen, Germany, on Sunday. All lead by title defender Tiago Ferreira and former champions Alban Lakata and Jaroslav Kulhavy and the phenomenon Mathieu van der Poel. On the female side, we count 77 registrations but especially five women are expected to win the title in the volcano landscape of the Hegau.

You can ask, whoever you want, everybody is like: wow, difficult to say. “I count about 10 different names, who could earn the title”, Czech Kristian Hynek says. Of course the bronze medallist of 2016 counts himself into this group of riders, even he confesses that the very fast course does not suit him very well. “My shape is very good and I know, where are the critical points on the course. But it stays a kind of lottery on this course.”

So, there lays a crackling tension over the Hegau landscape.

The men’s 98 kilometre (2x 49km) course demands 2800 meter of climbing, but the climbs are sometimes steep, but short. For the longest climb in Weiterdingen, the men need around 8 minutes. Hard to make the difference then.

It will be a kind of road racing, but only a kind of, since mountain biking is an individual sport and the riders normally are fighting on their own account.

This untypical kind of course with a lot of flat and windy sections motivated some more cross country riders than usual to race the marathon worlds. Jaroslav Kulhavy, the winner of the European title in Singen two years ago, is one of them.

“Jaroslav is maybe not in his best climbing shape, but that’s not necessary in Singen. On the flat, he is a machine, that counts”, Hynek tells after a training camp with the national team.

Kulhavy’s Specialized team mate Sam Gaze is another man to watch. The New Zealander was racing the Hegau Bike Marathon in 2016 and was beaten only by Alban Lakata in a tight sprint finish. “The marathon worlds are my main goal”, says Gaze.

The Austrian double world champion and five times worlds medal winner himself has won in Singen three times. So, he knows exactly how to handle the race. “You have to pay attention all the time, but finally I think the race is long enough to figure out the five or six strongest guys. It will not happen the same as two years before, when we let Jaroslav go”, Lakata predicts. By the way, he celebrates his 38th birthday on Sunday.

Apart from Portuguese title defender Tiago Ferreira, who is also expected to be able to race this course very well, everybody is pointing out Mathieu van der Poel as a really high valued contender.

The 22 years old Dutch cyclo cross star has shown his capacity on mountain bike not only by finishing second at the world cup in Albstadt, but also by winning the Belgian Mountain Bike Challenge. And he won some stages on the road during the previous weeks.

The phenomenal talented rider owns all skills to be called a favourite. His goal is nothing else than the title.

Now we have already six names. But there are some more, like Sella Ronda Hero winner Juri Ragnoli (Ita), even it is a completely different kind of course. Compatriot Damiano Ferraro is another one. And there are Lukas Flückiger and Nicola Rohrbach from Switzerland, both cross country specialists, but able to race long distances very well.

Daniel Geismayr from Austria, Hans Becking (Ned) are perhaps outsiders, but not without a chance.

Additional we can ask the question, what José Hermida is doing. Retired from cross country, the Spaniard was preparing for the marathon worlds, but not a lot of racing. “I do not know, but I will fish in the river and see if I can get a good result.”

Maybe, on their home soil, the Germans can play a surprising card. 2015 vice European champion Sascha Weber or Simon Stiebjahn or not at least Tim Böhme, who knows every corner of the course. He is a Singen native and won the race seven times.

There a indeed lot of cards in the game.

WOMEN: THREE out of FIVE?

It’s quite a bit easier to figure out the favourites to wear the women’s rainbow stripes. Even though Sabine Spitz points out the tactical circumstances seen at the Europeans in 2015, when with 15 kilometre to go, the leading group suddenly was doubled again.

“You have always to be in the high alert modus”, Spitz told in an interview some weeks ago. She has won already seven medals in marathon world championships and she has shown pretty good performances this spring, as example a second place at the UCI Mountain Bike World Cup in Nove Mesto.

That was behind cross country world champion Annika Langvad. The Danish Dynamite has finished now with her studies, now could be called a dentist. That may give her another boost. No big risk, to call her one of the top favourites.

Jolanda Neff comes as the title defender. Even though the Swiss suffered from a virus two weeks ago, cancelling her start at the Swiss Bike Cup in Gränichen. “I will race”, the current number one of the cross country ranking gave a short answer to the raising question.

There is no doubt about it, that if she is fit, Neff will be an ace in the game.

In case of Gunn-Rita Dahle-Flesjaa counts the same. She is a bit defensive in her statement. “I was not able to show my best so far this season due to injuries and sickness, but I still believe in a strong day here at the Worlds on Sunday. It will be a special race when it is so flat and it is not for sure that the strongest rider will win. Im excited. Time will show if I can manage to take my 11th tiltes this year or I will have to wait for the mountains next year“

Esther Süss, this year victorious at the Cape Epic, is also among the quintett to be named as top candidates. Since this season she is focusing on marathon. So there is not really a comparison with the other four ladies. But her impressive win at the Elsa Bike Trophy two weeks ago shows: the Swiss is in shape.

These five ladies unites one thing: all of them were wearing the marathon world champions jersey before, Dahle-Flesjaa for six times, Langvad three times and the other ones for one year.

2016 vice world champion Sally Bigham (GBR) seems not to be at the start line and 2016 bronze medallist Sabrina Enaux (FRA) is not registered.

The ladies will do first a 31 kilometre loop and then adding the 49 kilometre course to have 80 in summary (2050 altitude meter).