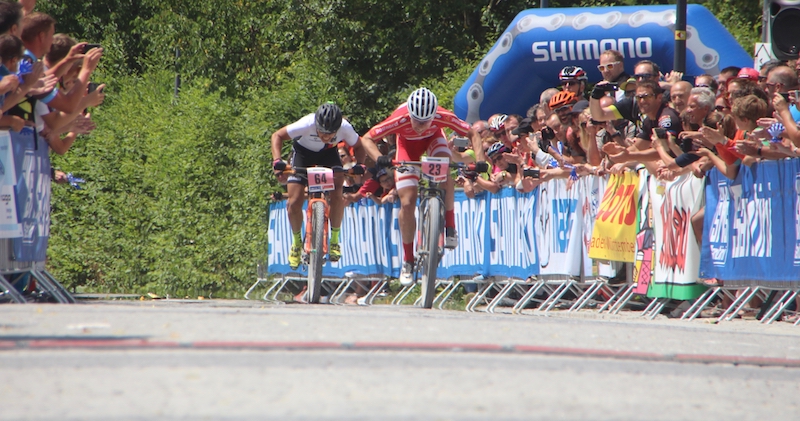 Annika Langvad from Denmark took the title at the UCI Mountain Bike Marathon World Championships in Singen, Germany. In front of her home crowd Sabine Spitz lost the title only in sprint, while Gunn-Rita Dahle-Flesjaa finished on third position.

The story of the women’s race was a bit the same as the one of the men. Title defender Jolanda Neff (Sui), Annika Langvad, Sabine Spitz and Gunn-Rita Dahle-Flesjaa showed the strongest performance in the climbs and finally after 60 of 80 kilometers the quartett was left alone at the front.

When it came to a longer single trail section, it was Jolanda Neff, who wanted to be the first. Same for Annika Langvad. The Danish slipped through. But 20 meters later she made a mistake and crashed.

So Neff passed, Spitz also and Dahle-Flesjaa was stopped by Langvad, who tried to get back on the course.

“In my opinion this was not really fair”, Dahle-Flesjaa complained. Langvad was able to catch back to Neff and Spitz, but not Dahle-Flesjaa.

At the last climb short climb, with 6 kilometer to go, Langvad and Spitz put some seconds between themselves and Neff with Dahle-Flesjaa 20 seconds behind.

Neff tried to come back, was not able to.

It came to a sprint finish between Spitz and Langvad. “500 Meters to go, Annika accelerated. I catched her back wheel, but I was not able to pass anymore”, Sabine Spitz described the decisive situation.

“I am really happy with my performance. I couldn’t have done better. Two years ago at the Europeans, I won the sprint finish, now I lost it. That’s racing”, Spitz told.

Annika Langvad: “I knew, it would be a tactical race and after my crash I had to push really hard to get back. I am really happy with this win. It’s a huge bonus after I finished my studies a short time ago. I enjoy everything so much, it’s unbelievable.”

For the bronze medal it was Gunn-Rita Dahle-Flesjaa, who surprised Jolanda Neff a few hundred meters before the finish. The Swiss had no eyes on the Norwegian, who showed a big moral.

“Annika blocked me, that was not fair. Jolanda and Sabine were gone”, Dahle-Flesjaa complained about the situation, which took her the chance to fight for the jersey.

“I have to be happy about the bronze medal, but normally we would have came in with four.”

About the fight for bronze she commented: “I saw Jolanda very stiff and knew about my chance. A medal is a medal at the worlds, so I am happy.”